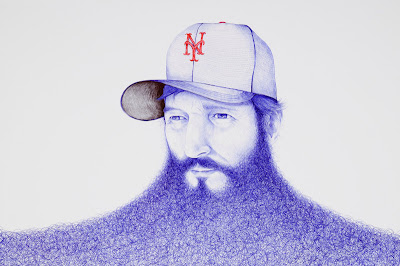 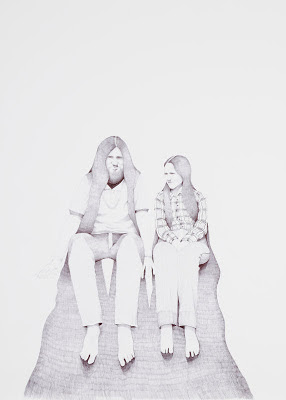 Tell me about the origins your childhood fantasy Water-face, one of the main subjects in your latest body of work?

‘Water-face’, yes, I don’t remember him appearing any time in particular, he was more or less always around for as long as I can remember.  When I was a small child, I would point and ask my mum things like ‘Who’s that man standing over there?’ or ‘there’s someone sitting in the chair mummy’ things like that. I was tiny when it all began, he was a figure who was always present, and he became an everyday occurrence, another presence in our lives.

Why did you name him Water-face, a shape-shifter archetype perhaps?

At the time I think I was too young to give it too much serious thought and to my mind his face looked like moving water. It’s only recently that I’ve understood the significance of the title I gave him. I called him Water-face because of the lack of identifying features.

In time, despite his lack of identifying features what did you learn about this character?

It was strange, he was always around, as if observing, protecting. He was never menacing or scary, that’s why my parents called him my imaginary friend, another addition to the family!  He was defiantly a male presence.  I vaguely remember him wearing checked shirts and jeans. I’m not too sure if that memory has shifted over time but that’s what I recall. I always wonder if he’s in the studio with me laughing at these silly drawings of him and me.  I have a lot of time to drift in the studio.

It’s only now that this figure has become a substantial part of my thought and practice. Over the years I have considered his meaning in some depth. Like any presence, I think we are always influenced in some way.  The difference being, my inspiration or influence is stemming from a phantom, a figure that stands somewhere between the real and the unreal.

So it’s hard to situate a definitive idea of what significance he had on me at such a young age. He has posed more questions concerning the self and the masquerade than anything else. It’s a funny feeling talking about a presence or spirit, I’m sure a lot of people would call it poppycock.

Yes,  in fact the more I think about and contemplate this figure, the more important his presence appears.  My practice for the past two years has more or less revolved around this ghostly character. Perhaps because of the ambiguousness and questions he has generated that he has became the impetus for the current research. I have a genuine curiosity into subjects surrounding the paranormal, identity, metaphysics, death etc.

He has defiantly held a significant position on the progression of the work. I soon realised that a hidden or subverted reading of my initial viewpoint (which was looking at the absurdity of masculinity) became the focus of my practice and a significant turning point into a different approach to making work and forming enquiry. I soon realised it was the metaphysical aspect that I was dealing with, as opposed to situating direct or conclusive answers.

I began to recollect and draw parallels with my current interests in film, literature and art. In this context, I realised Water face became an allegory for a comment on the position of the masculine within family and society. Substantial fictional links in novels I was reading and films I’d been viewing began to surface. It was this fictitious realm of thought that began to really propel my practice and interpretation.
Is there a shift in your work from the corporeal to the phantasmal realm?

Like I was saying, the metaphoric and fictitious space became more important to me. I don’t think the work is moving away from the corporal, the use of the ghostly image is in fact describing infinite possibilities, the ever-changing nature of the facade.

I think it’s important for people to form their own conclusions. I’m simply creating the fiction to allow for explanation. I am drawn to ambiguity in art. It’s also important for my work to be able to evolve in surprising ways. I don’t want to situate the work in any particular category or vernacular.

In the 1970's the profusion of hair was a sign of defiance, a countercultural gesture – it was the era of Hair: The Musical, follicular fantasies abounding in art, photography and literature as both men and women were growing it in profusion, this is also the era of your early childhood?

Family is very important to me and I have always had fond memories of my childhood. I had a lot of older cousins who really lived that era to the full and I idealized them.

I spent the past year and half in Queensland with my family, we were all going through a really hard period with a family illness, and so I was drawn into this very intimate, sad and intense realm. We were going over a lot of the family photos and images of my parents past. So it was inevitable that the work lent towards lineage and transgression.

With the representation of hair, it evolved over time and was cemented in my first solo show out of Uni at TCB in Melbourne. I was thinking about a lot of issues including the self, family, derivation, death and social bonds. The hair provided a common thread, a universal link between identities. It was performing as prosthesis, denoting the idea of time's significance and also history. I was recently reading an article by Catherine Grenier on Peter Doig’s work, she put it exactly when talking of his canoe paintings, ‘But while the mood of this painting is nostalgic, the object of that nostalgia is not so much a real historical moment as an elegiac feeling, an invitation to travel through time.

I think this idea of time, longevity, history being weighted through the depiction of hair, it has been important for the last body of work. Not only was it acting as a linage, a lifeline that channels and links family origins and legacies, but it also stood for a weighted history. It become a fable or journey through the act of monotonous drawing, hundreds of lines and scribbles which form a story, a longing, and a state of existence, similar to that of prisoners marking off the days on their cell wall… freedom! Another fable. This was the idea behind the bulbous weighted beards hanging precariously below the portraits. It acts as a topology of a journey into/through memory and time… …Hair continues to grow after death, no?

Tell about your father’s beard?

Yeah, I have never actually seen my Dad without facial hair.  So I thought it was the norm to have a large beard. My legacy.  I remember asking Dad if I had to have one when I was older and wondering if and when that would ever happen. By memory, he may have even lied and told me that everyman has one, it’s only natural.

Is the meaning of masculinity always shifting?

I’m not sure, in the beginning I was researching about the intricacies of the masculine. The fundamental nature of what it is to be male. But the work has shifted over that time. The use of any of these prosthetic devices (like a tie or hair-do for instance), which form an alibi for a male authenticity, is very fascinating.

The hair was simply a vehicle to navigate these ideas. I like the idea of making it invisible though. I haven’t thought about that before. I’m not an expert on hair like a lot of people tend to think.

Some close friends of mine are actually creating a show for TCB in Melbourne in September, ‘The Bald Show’! Charles O’Loughlin, Jackson Slattery, Matt Shannon, Lane Cormick and Daniel Moynahan, an exhibition based on the premise of bald pride. So it’ll be interesting to see what comes out of that, they’re great artists.  I’m not a hair advocate in any sense, that body of work was using the follicular to make my point. I’ll be moving on when my obsession subsides, I promise

I think hair is a prop for a male authenticity. What these deceptive identities imply is a type of cryptic character; the disguise becomes a conceptual sign for an imaginary identification. The beard is defiantly a shifty character. 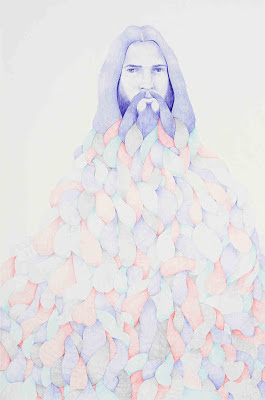 I think so, but this idea has only come up after exhibiting the work and listening to people’s response to the work. That’s not to say that I didn’t notice the shape of what I was drawing (‘Balloon Beard’ 2008) was an obvious ball sack. But the sexual connotations weren’t deliberate at all. I do however like the idea of the ambiguousness the figures can hold; there are so many different points of reference for the viewer to navigate their own conclusions……filthy animals.

The question of technique- biro has become a key component of your work so far- did the use of the humble fine-point Bic biro come about by chance or by design?

I had always doodled in school with Pens. I didn’t really like school much, so I was always drawing in my textbooks- amazing Terminator and Alien scenes. But I only started drawing seriously with biro as a potential medium with the recent TCB show. I saw it as a tool I could relate to with the audience.

I think mediums like oil paint for example can become elitist, a language that some of people don’t understand.  Everyone, I think, has, at some point has used or doodled with a biro, perhaps even on a daily basis.  I liked this idea that I could communicate on a very basic level.  This idea became a central motive in the overall concept of the work.

In time I have appreciated the consistency of the ink and its application and handling.  It is a very dry ink to draw with, drying instantaneously and able to shade similar to a pencil. I actually find it easier to use than a pencil now, funnily enough. 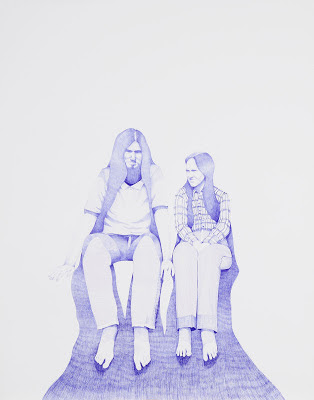 http://laithmcgregor.blogspot.com.au/
http://sullivanstrumpf.com/artists/78/
Posted by ARI Remix at 3:30 PM
Email ThisBlogThis!Share to TwitterShare to FacebookShare to Pinterest 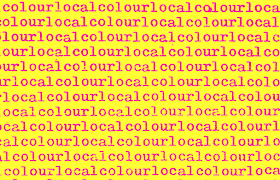